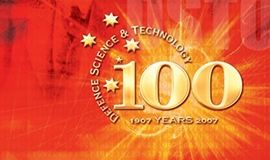 This book begins with the role of Cecil Napier Hake in investigating the feasibility of establishing a cordite factory in this country. From those early days defence science has undergone many changes.

Generations of Australian defence scientists have been responsible for a host of noteworthy achievements which have helped establish DST's world class reputation, and many of these achievements are highlighted in this book.

It was written by Peter Donovan and published as part of the DSTO's centenary celebrations in 2007. An electronic version may be accessed here.